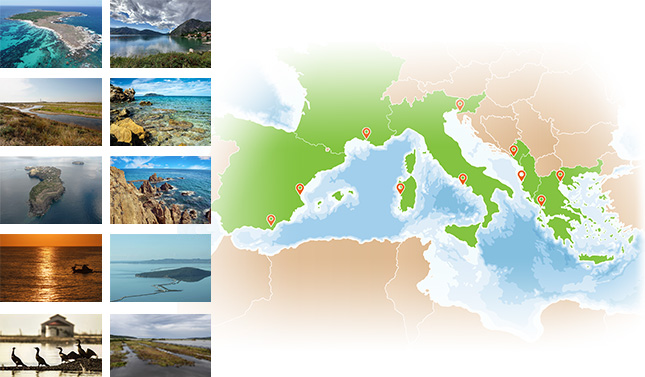 The Mediterranean basin hosting several rare, vulnerable and threatened species features as the second hot spot of biodiversity in the world...

The Mediterranean basin hosting several rare, vulnerable and threatened species features as the second hot spot of biodiversity in the world (IUCN factsheet). However, in the marine environment, only a small fraction (ca 7%) of the total surface of the Mediterranean Sea is legally protected, corresponding to 1,215 Marine Protected Areas (MPAs) and Other Effective Area-based Conservation Measures; their majority occurs in coastal waters of the EU territory (MedPan 2016).

MPAs constitute a network of geographically distinct marine regions where protection measures to safeguard and secure the well-being of the species and habitats these areas host (EEA 2018) take place. If managed properly, MPAs are regarded an effective tool for halting loss of marine biodiversity and abating human-induced threats, such as fishing and recreational activities (Mazaris et al. 2019).

To this end, the TUNE UP project has selected 10 MPAs in the Mediterranean Sea as pilot sites in an attempt to bring together key actors who are involved in the management and resource use such as administrative units, MPA managers, fishermen, and will jointly decide on the main threats and on the viable ways to tackle them to achieve a sustainable future for the environment and socioeconomic development of these sites. Due to their high ecological value the TUNE UP pilot sites are designated protected areas both at the national and international level, including the Natura 2000 network, the Ramsar Convention on Wetlands , as well as the Unesco World Heritage and Biosphere Reserve network.

The MPA of Amvrakikos Gulf is located in western Greece and is part of the Amvrakikos Wetlands Protected Area and the Natura 2000 network. It is also protected by the Ramsar Convention on Wetlands. This pilot site consists of an enclosed gulf affected by human activities in the wider region. Since ancient times the Amvrakikos Gulf was recognized as a rich area that supports a variety of productive activities.

Own to its unique natural characteristics, the Amvrakikos Gulf encompasses all current problems of integrated coastal management.

The MPA of Cabo de Gata- Níjar  Natural Park is located in the extreme southeast of the Iberian Peninsula, in the province of Almería. It spans the municipalities of Almería, Níjar and Carboneras, occupying an area of 49 012 ha of which 12 012 are marine waters and housing 63 km of the best-conserved steep coastline on the Spanish Mediterranean coast and some of its best seabeds.

The main characteristics of this Natural Park are derived from its semi-arid climatology and its volcanic origin, which forms a territory of high landscape and ecological value; which is endorsed by its recognition by UNESCO as a Biosphere Reserve in 1997.

The greatest pressures on the park are:

The Kotor-Risan Bay is part of the Bay of Kotor. The bay has been under the protection of UNESCO since 1979 as an integral part of the Natural and Cultural-Historical Area of Kotor.
The Kotor-Risan Bay is located in the interior of the Bay of Kotor, therefore it is more exposed to the influence from the coast. In the bays that form the Kotor-Risan basin - Morinj-Risan and Kotor, there are many underground and underwater springs. Among them are the springs Sopot and Ljuta, which can reach the peak of discharge in a short time.

The Albufera MPA is located in the Gulf of Valencia, in front of the coastline of the wetland of the same name. It is protected as an area of the Natura 2000 Network due to the importance of its habitats and the species of flora and fauna it harbors, and it is of vital importance for the conservation of several species classified as Endangered or Vulnerable on a regional and national scale.

However, due to its location, the marine part of l’Albufera faces a series of problems that threaten its biodiversity and the ecosystem services it provides, including fishing resources and leisure activities. The most relevant pressures and threats are:
• Changes in nutrient dynamics
• Changes in the dynamics of currents
• Seabed alterations
• Uncontrolled spills
• Poaching
• Invasive species
• Physical or acoustic disturbance

The Sazan - Karaburun MPA is located in the district of Vlora, in Southwestern Albania. It is home to a wide range of land formations, including mountains, caves, islands, land, bays, rocks, canyons and rocky shores, all contributing to an extremely unique and rich biological diversity of flora and fauna.
Due to these extraordinary and unique natural features, the Sazan - Karaburun marine protected area faces all the current problems related to integrated coastal management.

The Sečovlje Salina Landscape Park is located in the southwestern part of Slovenia. It has been protected as a landscape park since 1989, and as a Ramsar site since 1993. It is also classified as a Natura 2000 site.

The Sečovlje salt pans are among the northernmost active salt pans in the Mediterranean. Due to long-term human activity, a typical saltwater ecosystem has been formed. As many as 45 species from the red list of endangered species thrive in the park, together with 6 species of amphibians, 9 species of reptiles, more than 300 species of birds and 11 species of mammals. Most of them are in areas where human influence is limited.

The following have a great influence on the management of the landscape park:
• reduction of protected areas due to changes in the state border,
• expected rise in sea levels associated with climate change, which will have a major impact on habitat conservation and biodiversity,
• introduction and spread of invasive species,
• need for sufficient maintenance of embankments and canals,
• intensification of agriculture,
• disturbances of the natural environment due to the proximity of the airport and important road and sea routes.

The MPA of the Sinis Peninsula-Mal di Ventre Island extends over an area of over 250 km2 and along 30 km of coastline. Established in 1997, and managed by the Municipality of Cabras, the MPA is a Natura 2000 site and includes the shores of three very important Ramsar sites and a Specially Protected Area of Mediterranean Importance (SPAMI). The MPA also houses the precious archaeological site of Tharros.

The former saltworks of Camargue

The former saltworks of Camargue are located in the south of the Rhone Delta in southern France. The MPA is part of the Natural Regional Park of the Camargue and a UNESCO Man and Biosphere Reserve. It is composed of a mosaic of coastal habitats that host a rich biodiversity and an array of human activities.

The site, which was previously dedicated to salt production, is now being restored using nature-based solutions.

Characteristics of the pilot site:

This pilot site offers multiple benefits to humans, as its ecosystem services and goods are vital for the region. For example, it provides water for water supply and irrigation, protects residential and rural areas from floods, regulates the climate, provides food, and allows research, education, and recreation.
Due to its important ecological importance, this area has been included in the Natura 2000 network. At the same time, it is one of the 10 sites in the country protected by the Ramsar Convention on Wetlands.

The Ventotene and Santo Stefano islands MPA, established in 1997, is part of the Pontine Archipelago, an archipelago of volcanic origin that includes two distinct groups of islands, of which only Ponza and Ventotene are inhabited. The coasts of all the islands consist of high cliffs, submerged caves and rough basalt cliffs interspersed with grasslands that descend into the sea.

All news
Back to top